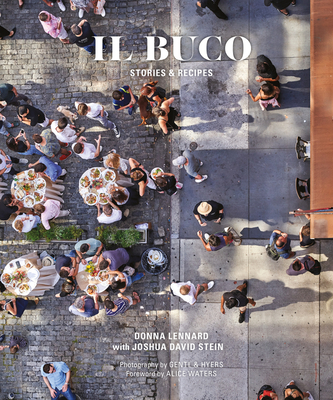 In honor of its twenty-fifth anniversary comes this full-color culinary celebration of Il Buco, one of New York City’s most beloved restaurants, featuring more than 80 mouthwatering recipes and detailing the romantic origins of the restaurant’s philosophy of sourcing the best prime materials, including olive oil, salt, vinegar and all that make the Mediterranean way of life so alluring.

"This book holds the succulent substance of Il Buco’s history, which has always been guided by Donna’s acute intuition. Through these pages, we travel around the Mediterranean, from the vineyards of Umbria to the salt flats of Sicily, visiting the farmers, artisans, and winemakers in their element. And then we return to Bond Street, stories and recipes in hand, to celebrate life and everything possible at the melting edge of sizzling pans and the heart of Italy."—Francis Mallmann

In New York City, restaurants, even very good ones, come and go. But there are a very small number of establishments that take root and continue to flourish, where food, wine, atmosphere, history, and all the makers behind the scenes come together in a unique alchemy to create an experience. Il Buco is such a place. For over 25 years, Donna Lennard has presided over an international—and ever growing—family of artisans, farmers, winemakers, chefs and regulars from her outpost on Bond Street in the heart of New York City.  Since 1994, Il Buco has withstood the test of time.

In Il Buco, written with Joshua David Stein, Donna shares her incredible journey from antique shop owner to award-winning restaurateur and taste-maker. She reflects on the iconic ingredient-driven, farm-to-table Italian cooking that seduced palates and earned the loyalty of notoriously discriminating New York diners. Donna also expounds upon the essential elements of good eating and good living she learned over the restaurant’s nearly three-decade history. Both a cookbook and a deeply personal journey through the places and with the people who have influenced the restaurant’s ethos the most, Il Buco includes the beloved best-of dishes from the kitchen’s roster of now-famous chefs: Ignacio Mattos’s Black Kale Salad, Justin Smillie’s Bucatini Cacio e Pepe, and Sara Jenkins’s Porchetta alla Romana, to name a few.  It also includes profiles of the artisans whose craftsmanship evokes the warm Mediterranean patinas that have enhanced the restaurants’ atmosphere over the years.

Donna has dedicated her life to identifying, cultivating, and celebrating the essential ingredients of a beautiful life well-lived. Il Buco isn’t just a place, it’s a feeling—of warmth, of home, of ease, of love—and Il Buco allows any home cook to experience some of the restaurant’s beautiful and inviting magic, creating sumptuous easy meals to enjoy at his or her own table. Accompanying the mouthwatering recipes and gorgeous photography are Donna’s insights on what it truly means to live well and to eat well and tributes to food producers in Spain, Italy, France and other parts of the world, including dedicated chapters on the building blocks to a perfect meal: salt, olive oil, wine, and salumi, among others.

Il Buco is a very personal exploration of what makes the heart of a restaurant and a lifestyle: a celebration of a true New York success story. It is a book about learning to listen to what pleases us, and a reminder of just how wide, wonderful, and flavorful the world is.

Donna Lennard is the owner, founder, and visionary of Il Buco, Il Buco Alimentari, and Il Buco Vita in New York City and Bottega Il Buco in Ibiza, Spain. For nearly twenty-five years, she has discovered and championed such game-changing chefs as Ignacio Mattos, Sara Jenkins, Jody Williams, and Justin Smillie, who rose to fame in her restaurants’ kitchens.

Joshua David Stein is a Brooklyn-based writer and editor. A contributing editor to Food & Wine and the former restaurant critic for the New York Observer and the Village Voice, he is also the co-author of Notes from a Young Black Chef with Kwame Onwuachi, the forthcoming Nom Wah Tea Parlor Cookbook, and the U.S. editor of Where Chefs Eat.

Alice Waters is a chef, author, food activist, and the founder and owner of Chez Panisse Restaurant in Berkeley, California (est. 1971). She has been a champion of local sustainable agriculture for over four decades. In 1995 she founded the Edible Schoolyard Project, which advocates for a free regenerative school lunch for all children and a sustainable food curriculum in every public school. In 2015 she was awarded the National Humanities Medal by President Obama, proving that eating is a political act, and that the table is a powerful means to social justice and positive change. Alice is the author of sixteen books including her critically acclaimed memoir, Coming to My Senses: The Making of a Counterculture Cook, the New York Times bestsellers The Art of Simple Food I & II, and The Edible Schoolyard: A Universal Idea.

Francis Mallmann is South America’s most celebrated and beloved chef. Fire played a large role in Francis’ childhood growing up in Patagonia, and those memories help define him and his cooking techniques today. Author of Seven Fires: Grilling the Argentine Way (2009) and Mallmann on Fire (2014), Mallman has nine restaurants around the world and was featured in the Netflix Documentary “Chef’s Table.”

Joshua David Stein is an author and editor living in Brooklyn. He is the coauthor of Notes from a Young Black Chef, Il Buco Essentials, Food and Beer, and Epicurean Journeys, and the author of To Me He Was Just Dad. He served as the U.S. editor for the bestselling Where Chefs Eat. Stein is the editor at large at Fatherly, a contributing editor at Food & Wine, and the former restaurant critic for the New York Observer and the Village Voice. His work has appeared in New York, the New York Times, Esquire, GQ, the Guardian, and many other outlets.

This feature require that you enable JavaScript in your browser.
END_OF_DOCUMENT_TOKEN_TO_BE_REPLACED

This feature require that you enable JavaScript in your browser.
END_OF_DOCUMENT_TOKEN_TO_BE_REPLACED