I Never Called It Rape - Updated Edition: The Ms. Report on Recognizing, Fighting, and Surviving Date and Acquaintance Rape (Paperback) 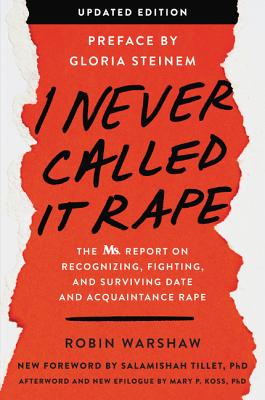 “Essential. . . . It is nonpolemical, lucid, and speaks eloquently not only to the victims of acquaintance rape but to all those caught in its net.”— Philadelphia Inquirer

With the advent of the #MeToo and Time’s Up movements, and almost daily new reports about rape, both on and off campuses, Robin Warshaw’s I Never Called It Rape is even more relevant today than when it was first published in 1988. The sad truth is that statistics on date rape have not changed in more than thirty years. That our culture enables rape is not just shown by the numbers: the outbreak of complaints against alleged rapists from Bill Cosby and Harvey Weinstein to Matt Lauer and President Donald Trump has further amplified this horrifying reality.

With more than 80,000 copies sold to date, I Never Called It Rape serves as a guide to understanding rape as a cultural phenomenon—providing women and men with strategies to address our rape endemic. It gives survivors the context and resources to help them heal from their experiences, and pulls the wool from all our eyes regarding the pervasiveness of rape and sexual assault in our society.

Robin Warshaw writes on social issues, medicine and health. In writing I Never Called It Rape, she used pseudonyms for the many women who shared their stories but wrote openly about her own acquaintance rape for the first time. She has never regretted that decision and is grateful to the women (and some men) who have reached out over the years to tell her how the book helped them. Warshaw is a contributing writer for Living Beyond Breast Cancer and writes for other nonprofits and publications. She is a member of the Authors Guild, American Society of Journalists and Authors, and the Association of Health Care Journalists. Her work has received several national awards.

Salamishah Tillet is a rape survivor, activist, and feminist writer. She is the cofounder of A Long Walk Home, a nonprofit that uses art to empower young people to end violence against girls and women, and the writer of the award-winning Story of a Rape Survivor, a performance that chronicles her pathway to healing after being sexually assaulted in college. She is the faculty director of the New Arts Jus- tice Initiative at Express Newark and the Henry Rutgers Professor of African American Studies and Creative Writing at Rutgers University.

”A devastating portrait of men who rape women they know... based on first-person accounts, scholarly studies and data from a nationwide survey of college campuses.”
— Publishers Weekly

“A deeply disturbing study of date or acquaintance rape and the myths and cultural attitudes that encourage it.... For women who have suffered acquaintance rape, Warshaw’s book should be extraordinarily helpful. But it should be read by many others as well: a painful, provocative, and important work.”
— Kirkus

“Essential . . . It is nonpolemical, lucid, and speaks eloquently not only to the victims of acquaintance rape but to all those caught in its net.”
— Philadelphia Inquirer

This feature require that you enable JavaScript in your browser.
END_OF_DOCUMENT_TOKEN_TO_BE_REPLACED

This feature require that you enable JavaScript in your browser.
END_OF_DOCUMENT_TOKEN_TO_BE_REPLACED