Somebody Else's Kids: The True Story of Four Problem Children and One Extraordinary Teacher (Paperback) 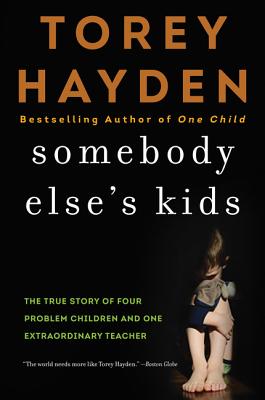 From the bestselling author of One Child, the true story of four problem children and one extraordinary teacher.

They were all "just somebody else's kids"—four problem children placed in Torey Hayden's class because nobody knew what else to do with them. They were a motley group of children in great pain: a small boy who echoed other people's words and repeated weather forecasts; a beautiful seven-year-old girl whose brain was damaged by savage parental beatings; an angry and violent ten-year-old who had watched his stepmother murder his father; a shy twelve-year-old who had been cast out of Catholic school when she became pregnant. But they shared one thing in common: a remarkable teacher who would never stop caring—and who would share with them the love and understanding they had never known and help them become a family.

Torey Hayden is an educational psychologist and a former special education teacher who since 1979 has chronicled her struggles in the classroom in a succession of bestselling books. She lives and writes in the U.K.

This feature require that you enable JavaScript in your browser.
END_OF_DOCUMENT_TOKEN_TO_BE_REPLACED

This feature require that you enable JavaScript in your browser.
END_OF_DOCUMENT_TOKEN_TO_BE_REPLACED