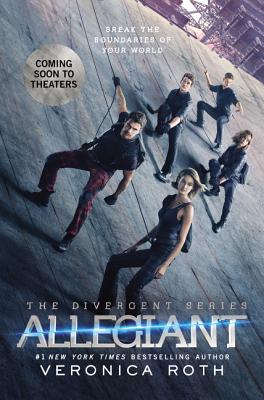 By Veronica Roth
Email or call for price
Special Order

This is book number 3 in the Divergent Series series.

One choice will define you. What if your whole world was a lie? What if a single revelation—like a single choice—changed everything? What if love and loyalty made you do things you never expected?

The explosive conclusion to Veronica Roth's #1 New York Times bestselling Divergent trilogy reveals the secrets of the dystopian world that has captivated millions of readers and film fans in Divergent and Insurgent. This young adult novel is an excellent choice for accelerated tween readers in grades 7 to 8, especially during homeschooling. It’s a fun way to keep your child entertained and engaged while not in the classroom.

“Roth shakes up her storytelling (and will do the same to some readers) in this highly anticipated, largely satisfying wrap-up to the Divergent trilogy.”
— Publishers Weekly

“Roth’s plotting is...intelligent and complex. Dangers, suspicion, and tension lurk around every corner, and the chemistry between Tris and Tobias remains heart-poundingly real. This final installment will capture and hold attention until the divisive final battle has been waged.”
— Publishers Weekly

“A surprise ending that is gutsier and much less predictable than the rest of the series would lead one to expect.”
— Los Angeles Times

“The plot is believably complex, and Roth makes the wise decision in this last installment to reveal the secrets early on and let the focus fall on her characters as they grapple with this new reality, the choices that face them, and the repercussions of their actions.”
— Bulletin of the Center for Children’s Books

“In the end, this is a world replete with loss, and the heroes must suffer their own in a twist that will break the hearts of many readers but stays true to the merciless dystopia that Roth has created.”
— Bulletin of the Center for Children’s Books

This feature require that you enable JavaScript in your browser.
END_OF_DOCUMENT_TOKEN_TO_BE_REPLACED

This feature require that you enable JavaScript in your browser.
END_OF_DOCUMENT_TOKEN_TO_BE_REPLACED