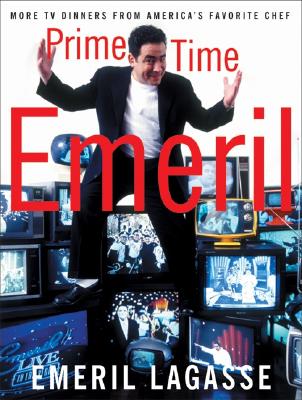 By Emeril Lagasse
Email or call for price
Hard to Find

With more than 1,000 shows on the food television network, weekly appearances on Good Morning America, and guest spots with Rosie O'Donnell and Jay Leno, it seems that people can't get enough of Emeril Lagasse. Happily, here's Prime Time Emeril: More TV Dinners from America's Favorite Chef. It's another big helping of the food, the fun, and the man America has fallen in love with.

Now Emeril's fans can cook more of the dishes they've seen him prepare on prime time television -- more than 150 of them. They're easy to understand and simple to follow, and the results are foolproof and pure Emeril.

Each chapter of Prime Time Emeril is filled with recipes, techniques, and tips to help you re-create Emeril's unique New American style of cooking right in your own home. These recipes feature his kicked-up favorites, including Chicken Drumettes with Blue Cheese Sauce and Emerilized Barbecued Oysters with Rosemary Biscuits. There are new twists on Louisiana classics, including gumbo, jambalaya, and beignets.

From his hometown of Fall River, Massachusetts, Emeril shares the food he loved best as a kid -- recipes such as Hilda's Stewed Chicken, Madeira-Braised Short Ribs, and Lobster Portuguese-Style.

Re-create Emeril's amazing appetizers, including Spicy Duck Empanadas with Cilantro Cream or Singing Shrimp. How about a big bowl of steaming Monkfish Chowder or Rabbit, Andouille, and Wild Mushroom Gumbo? Kick it up more than a few notches with Mardi Gras Jambalaya, Tuna of Love, or Bamburgers. And Emeril has never been shy about dessert. Whip up one of his creations, such as Pumpkin Cheesecake, Cherry and White Chocolate Bread Pudding, or Mr. Lou's Chocolate Praline Pie.

So pick up this book and pick up a pan. You're ready for some prime time cooking with Prime Time Emeril.

Emeril Lagasse is a chef, restaurateur, and the author of eighteen bestselling cookbooks, including the recent Emeril's Kicked-Up Sandwiches and Sizzling Skillets and Other One Pot Wonders. He is the proprietor of thirteen award-winning restaurants across the country and is the host of The Originals with Emeril and Emeril's Florida, both airing on the Cooking Channel. He has been the food correspondent for ABC's Good Morning America for fourteen years. In 2002, Emeril established the Emeril Lagasse Foundation to support children's educational programs that inspire and mentor young people through the culinary arts and promote nutrition and healthy eating.

This feature require that you enable JavaScript in your browser.
END_OF_DOCUMENT_TOKEN_TO_BE_REPLACED

This feature require that you enable JavaScript in your browser.
END_OF_DOCUMENT_TOKEN_TO_BE_REPLACED